skip to main | skip to sidebar

How to celebrate Turing in Hastings?

How to celebrate Turing in Hastings?

Please add your suggestions for Turing Celebrations in comments here:
Posted by Deano at 10:34 1 comment: 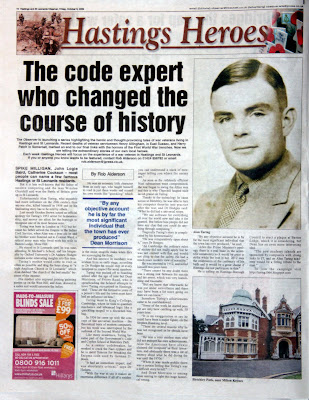 "Turing went to King's College Cambridge, where he took to quantuum mechanics and advanced logic like a quockling seagull to a discarded binbag".

I'd like to think that Turing would have been as amused as I am by that :)
Posted by Deano at 12:46 2 comments:

I was setting up a Facebook page for the Alan Turing Campaign this morning, and people were literally joining before I'd even  finished. Currently 36 members, and I haven't even had my tea yet - and I'm greatly encouraged by all the messages of support.

Look out for the article on Alan Turing in this weeks Observer!
Posted by Deano at 19:42 No comments:

Welcome to a campaign to get recognition for a remarkable man, who not only laid down the foundations for the modern computer, but was described by Churchill as "The Man who won the Battle of Britain".

Few people know that Alan Turning spent his formative years in St Leonards, and whilst he is celebrated around the world as a genius to whom we all owe a great debt - in his home town he has been completely ignored.

The Prime Minister recently issued a much belated apology to Turing for the way he was hounded to his death after the war because of his sexuality.

I believe that the people of Hastings have the opportunity to put right an injustice ourselves, and to proudly celebrate someone who I believe is by far the most significant person ever to live in the town.

2012 is the centenary of Turing's birth - there will be events taking place around the globe to celebrate the father of the modern computer - this gives us a little over two years to pay the man the respect he deserves.

I hope this site will act as a rallying point for all those who feel as I do, and who wish to join this campaign. I'm open to suggestions as to what could be done - a Blue Plaque at the place he lived perhaps? a science festival in 2012? an exhibition of the art and literature that has been inspired by him? a performance of the play based on his life? Perhaps one of the proposed new academies in Hastings could be named after him. That would be particularly appropriate since they are to adopt Information Technology as their speciality. Who better to symbolise that than the man who created the field?

If there is enough interest here I hope to arrange a meeting in the next few months to form a group, and to make plans. In the meantime, please do leave messages of support, and any suggestions you have - or join the associated Facebook Campaign page. 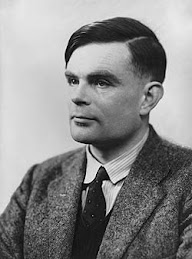 Father of the Computer, and "The man who won the Battle of Britain" 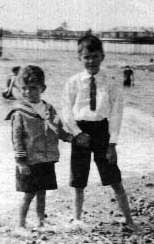 If you would like to join the campaign, please email me at: